The Dominican Republic has a small Japanese presence of a relatively recent creation. The impact the Japanese migrants have in Dominican society greatly surpasses their numerical presence.

The Dominican government created eight agricultural colonies in the following places. We include the name of the town and the province in parenthesis.

The Most Famous Japanese Colony

The Japanese colony settled in Constanza gains the greatest attention. The reason for this is unknown, but its fame reached such heights that most Dominicans that know of the existence of the Japanese community think that Constanza is the only place where the Japanese and their descendants live.

Documentation of the Japanese Migration 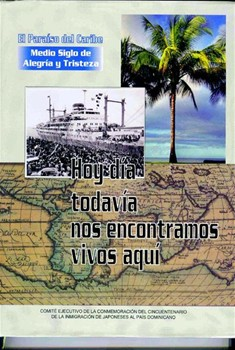 Cover of the Dominican version of the book Hoy día, todavía nos encontramos vivos aquí, which documents the experiences of the Japanese that opted to migrate to the Dominican Republic.

The Japanese Park in Jarabacoa

In 2008 the mountain town of Jarabacoa inaugurated the Parque Japonés (The Japanese Park), the first of its kind in the Dominican Republic. This is a very beautiful park with Japanese gardens. Its creation of this park was to commemorate the very valuable contributions to the development of the fertile Jarabacoa Valley and the town of the same name.

Monument to the Japanese Immigration

In 2013 the Japanese Embassy, the International Cooperative Agency of Japan, and the Community of Japanese Immigrants in the Dominican Republic united resources and efforts to create and inaugurate the Monument to the Japanese Inmigration in Santo Domingo.

The Dr Rafael María Moscoso National Botanical Gardens in Santo Domingo incorporates what is the largest Japanese Garden in the Caribbean and one of the most exquisites in the Americas. It was a gift from the Japanese immigrant Mamoru Matsunaga to the botanical gardens and Dominican society.