On May 3, 1935 The Evening Star of Washington DC published U.S. Sales Agent Jailed by Trujillo. This event creates a diplomatic crisis that included an invasion threat from Benito Mussolini, the dictator of Italy. After the crisis, Amadeo Barletta abandons the Dominican Republic and establish himself in La Habana, Cuba. He will remain outside of the Dominican Republic until Rafael Leonidas Trujillo is killed in 1961. At that time he returns to Santo Domingo and continue to develop his company Grupo Ambar, which owns the Santo Domingo Motors Company. 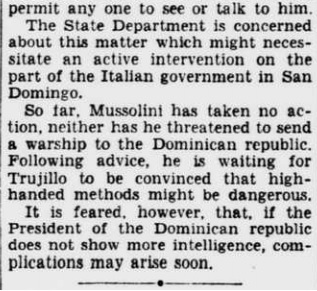