One of the most horrible episodes is the massacre committed by the Haitians in 1805 in Santiago de los Caballeros. While the eyewitness account by Santiago native Mr Gaspar Arredondo Pichardo exists; there has never been found a newspaper article within and outside the Dominican Republic that mentions this event. For this reason, we are pleased to present our discovery of the first newspaper article of the 1805 massacre of Santiago.

In April 25, 1805 the Cooperstown, New York newspaper The Otsego Herald published what until now is the only newspaper article focused on the 1805 massacre of Santiago. 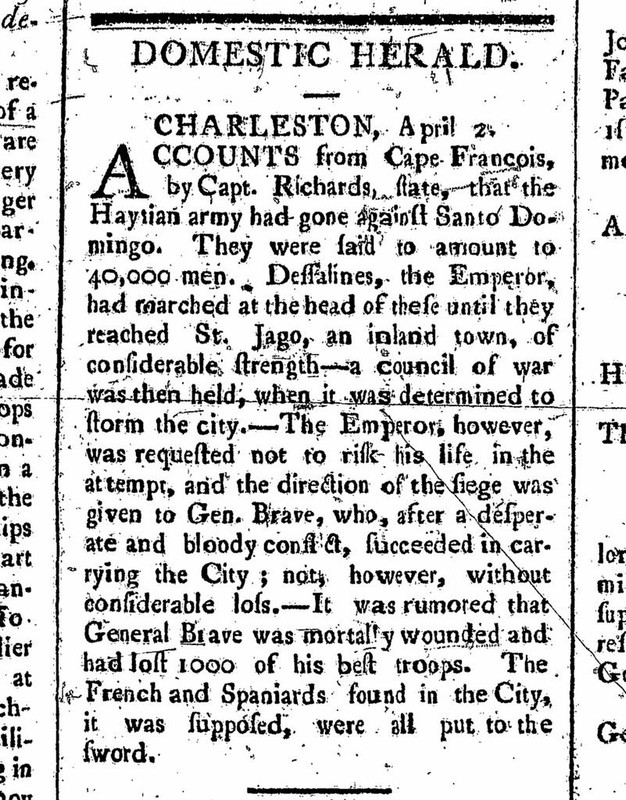 CHARLESTON, April 2.
Accounts from Cape Francois, by Capt. Richards, state that the Haitian army had gone against Santo Domingo. They wre said to amount to 40,000 men. Emperor Dessalines marched at the head of these until they reached Santiago, an inland town of considerable strength. A council of war was then held, when it was determined to storm the city. The emperor, however, was requested not to risk his life in the attempt. The direction of the siege was given to General Brave, who, after a desperate and bloody conflict, succeeded in carrying the city; not, however, without considerable loss. It was rumored that General Brave was mortally wounded and had lost 1,000 of his best troops. The French and Spaniards found in the city, it was supposed, were all put to the sword.

To better understand how this horrible massacre took place, below are the relevant parts of the eyewitness account of Mr Gaspar Arredondo Pichardo. He was one of the few Santiago natives that survived the carnage and moved to Cuba, where he wrote this account as part of his family’s history. The writings are in the Spanish of that era, which includes many spellings that are different from today. At the foot is our translated version. 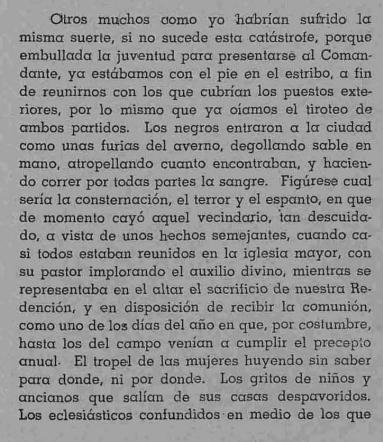 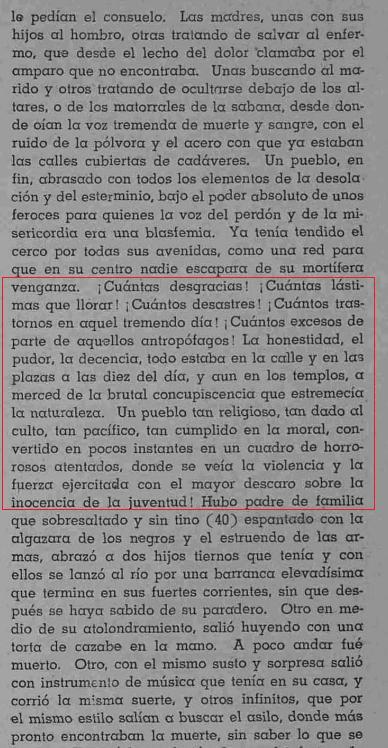 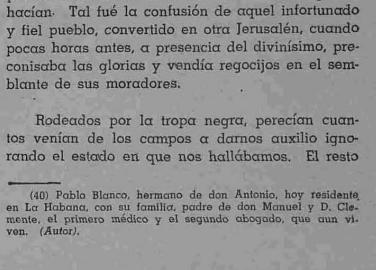 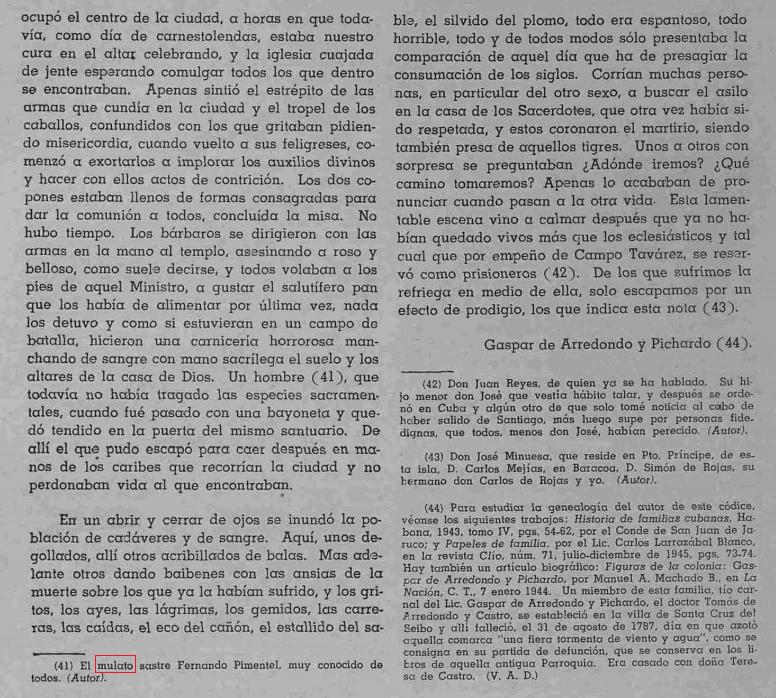 Many others like me would had suffered the same fate if this catastrophe would had never happened. When the youth was getting ready to present themselves to the commandant, we had a foot in the stirrup with the purpose of reuniting with those that covered the exterior positions, when we started to hear the gunfire from both sides. The blacks entered the city with an immense fury, killing with sabers, running over everything that they found, and made the blood flow in all directions. Imagine the consternation, the terror, and the fear when that town was befallen. It was so neglected with such a danger on the verge of taking place.

All were in the main church with the priest asking for the Divine intervention. While representing on the altar the sacrifice of our redemption and ready to provide the holy communion on one of the days of the year when it was custom that even the country people arrived to comply with the anual precept. The eccclesiatics were confused in the middle of those that asked for comfort. The mothers, some carrying their children, others trying to save the bedridden sick clamored for a protection that they could not find. Ones were searching for their husbands, others tried to hide below the altars or in the shrubbery in the savannah, from where they heard the tremendous cries of death and blood. The sound of the gunpowder and the bullets, and the streets were already covered in cadavers. A town engulfed in all the elements of desolation and extermination, completely at the mercy of these ferocious for whom the cries of apologies and mercy were blasphemies.

Once the siege was in all the streets, as if it was a closed of cordon so that no one from the center could escape the deadly revenge. Too many disgraces! Too many pity to cry! Too many disasters! Too many disorders in that tremendous day! Too many excesses by those cannibals! The honesty, the modesty, the decency; everything was on the streets and in the plazas in broad daylight. Even in the churches were not spared of the brutal actions that shook nature. A people so religious, so educated, so pacific, so moralistic; reduced in short moments in a scene of horrible acts where the violence and the extreme force was on display in front the the youth’s innocence!

There was a father of a family (40) that was so startled and scared with the uproar of the blacks and the roar of the arms, that he grabbed two of his children and with them in arms jumped from the high gully into the roaring river was never seen again.
Another man that in the middle of the bewilderment was seen running with a casabe bread on hand, was later seen dead. Another person equally shocked and scared ran from his house with a musical instrument and he met the same fate. Many others that in the same manner ran out of their homes searching for an asylum, but instead they found death without knowing why. The confusion was so great in that unfortunate and faithful town that was converted into another Jerusalem, when only a few hours prior in the presence of God was praising their glories and enjoyments.

Surrounded by the black troops, all the country people that came to our help were killed. The rest of the people ran to the center of town at a time when our priest was still celebrating mass in the altar and the church was filled with people. Just barely when the sounds of the arms began to flood the town and the throng of the horses was confused with the cries of those that asked for mercy, the priest began to extol his congregation to ask for God’s intervention. The church was ready for giving the sacred communion to all, but it was too late. The barbarians entered the church with their arms on hand, violently killing everyone. All fell on the feet of the priest hoping to eat their last communion, but nothing stopped them and, as if they were in a battlefield, they made a horrible slaughter staining the floors and the altars of the house of God!

There was a man (41) that had yet to swallow the holy communion when he was pierced with a bayonet and was left lying on the door of the church. Whomever was able to escape from the church fell to the hands of the cannibals that overran the town and did not forgive the life of everyone that they found.

In a blink of an eye the town was filled with cadavers and blood. Here were some with their throat slit, over there were others ridden with bullets. Further down were others with the anguish of death laying over the bodies of others that had already suffered the same fate. The screams, the tears, the wailings, the running, the falls, the echo of the cannons, the sounds of the sables, the whistle of the bullets; everything was fearful, everything was horrible on that horrible day that will presage the centuries. Many people, particularly women, were running in search of an asylum at the house of the priests, which were not broken into, and they crowned the martydom once they were caught by those cannibals. With surprise everyone asked each other where will we go?, which way will we take? As soon as they finished pronouncing those words they were crossing over to the afterlife.

This regrettable scene calm down after there was no one left alive, except the priests and a handful that due to the intervention of Campos Tavárez were reserved as prisoners (42). Of the ones that suffer in the middle of the fray, the only ones to escape by an act of God, are those indicated in this note (43).

(40) Pablo Blanco, brother of Mr Antonio, today a resident of La Habana (Cuba) with  his family. Father of Mr Manuel and Mr Clemente, the first a doctor and the second a lawyer.

(42) Mr Juan Reyes, of whom I have already mentioned. His youngest son Mr José that dedicated to chop trees and then became a priest in Cuba. Also a few others of whom I received some news once I left Santiago, however I later became aware by people of confidence that all had been killed, except Mr José.